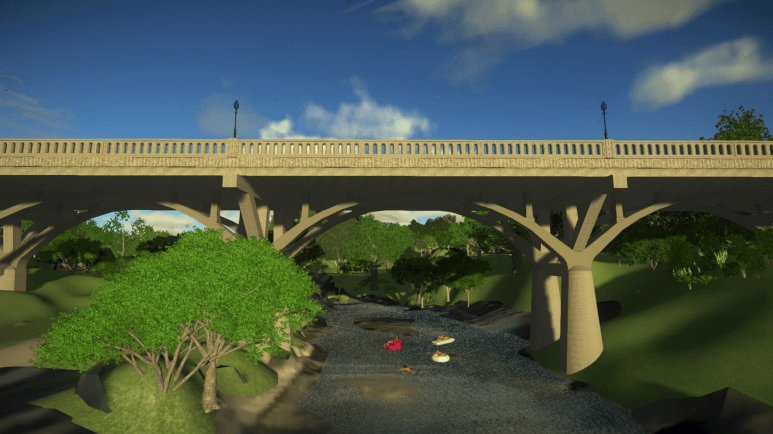 Thanks to The Texas Department of Transportation’s Off-System Bridge Program, our beloved San Antonio street bridge is finally getting a makeover.

The old structure, built in 1923, has dated itself with ten foot wide traffic lands and four foot wide sidewalks. Emergency vehicles are too heavy and too wide to safely cross the old bridge. Most importantly, TxDot engineers recently deemed the bridge structurally unsound.

We spoke with Nathan Manlove, the president of the Downtown Association and owner of The Ammo Group: A New Braunfels Marketing Agency, and asked him to weigh in on the impact that the bridge closure might have on Downtown New Braunfels.

“There’s never a good time to close a bridge, especially this one. But it had to be done, so we’ll have to get through it,” said Manlove. “Everyone in New Braunfels should rally behind the businesses on the other side of the detour – Currents, Muck & Fuss, Sidecar, Napa, 444, and more. We should give them more support than ever.”

Currents Decor & Design on San Antonio Street seems to be embracing the construction and making the best of it as seen in this video.

This $4,500,000 project is expected to take up to 16 months to complete with the water recreation on the Comal River underneath the bridge scheduled to reopen Memorial Day Weekend in 2020. The City of New Braunfels is managing the detours, signage, and updates. This site has the most up-to-date information about this massive project.

>A rendering of the new San Antonio Street Bridge to open fall of 2020.<<

One of the reasons the reconstruction is going to take so long to complete is due to the careful preservation of the historical elements of the bridge. As you may know, our downtown values preserving our history and we are glad the the bridge will follow suit.

Capital Excavation, who is contracted to carry out this TxDot project, will keep the arched understructure in place in order to maintain the historical aesthetic of the bridge. They will upgrade the light posts and railings to incorporate modern technology and safety features but the overall look of the bridge will be very close to the historic original.

“The new bridge is going to be bigger, better, and safer. It will be an asset for downtown. It’s going to stink for a while, but if we all continue to support the businesses affected by it, we’ll make it,” said Manlove.

The new bridge will be much safer with 8-foot sidewalks for pedestrians and 15-foot traffic lanes for vehicles. Check out this video rendition that gives you a really good idea of how the beautiful, new bridge will look and function. The newly reinforced structure will allow for heavy vehicles (including emergency vehicles) to safely pass. And, it promises to be just as charming as it once was.

Capital Excavation is also taking extra care to have minimal impact to the environment around the bridge and especially to the Comal River, which we also appreciate.

When asked if his business had experienced any noticeable change in these early stages of bridge closure, Nathan Manlove replied, “AMMO is not a retail business, so we’re not affected really. Further, we’re on Comal Avenue (not past the detour). Regarding the “feel” (of downtown), I believe the City and TxDot have done a good job in not making the detour signs HUGE. The detour signs at Comal Avenue are to the side of the road and not gigantic. To me, the rest of East San Antonio Street looks very accessible and open for business.

“Downtown is where New Braunfels began and is still the heart of our amazing city,” Manlove reminds us. “We’ve been open for business for almost 175 years. People can still get down here easily to shop, play, dine, do business, and stay overnight.”

So check your temporary route on the detour map and come on down to Downtown New Braunfels. All of our regularly scheduled events – such as First Fridays, Spooktacular, and all of our other seasonal activities – will not be affected by the closure. The bridge is closed, but we are all still open and still having a great time. See you soon!